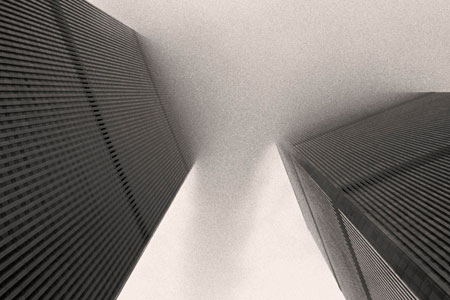 ...and the World Trade Center

So how is it you imagine you will not be directly, personally affected by what is going on globally? The very air you breathe, the energy fields you live in are charged with energy and excitement and fear right now, feelings and thoughts and plans all out of proportion in reaction to heightened incidents.

You know, the night before the world trade center in New York was attacked and destroyed, there was a thunder and lightening storm that hit the towers and people watched the lightening be discharged by the lightening rods on the roof and the buildings were surrounded by God's fire shooting from the heavens .It was ironic that that happened as an act of nature, and that the next morning, God's fire, propelled and guided by HUMANS, destroyed those buildings, and so many precious lives at the same moments.

Humans, by definition of being incarnated, have limited, finite minds and capacity to understand their experiences, and it was the HUMAN element that caused the destruction-- the hate, the evil-- not God. God is one-ness, and when you meditate, in whatever form, you re-connect to God and to the God within you that you are. If you truly and sincerely connect to your God within and to God, you cannot have the capacity to be or do evil. Period.

Because God is utterly, totally, neutral and therefore, from a human perspective, good. Good is an extension of god, you know, verbally, literally. It is humans that do not understand the nature of the god that they are and the God that they are, and who misuse and abuse the energies.

And even the evil ones have, somewhere in their core, a good intention which got so twisted out of it's own original design and into something evil because of human attachment to outcome.

The core is good, God; the manifestation via human manipulation is not necessarily good. It is not a question as to whether I perceive evil, but do you? And if you do or can, then of course it exists, because you can imagine it. In order to enlighten, one must be able to own and acknowledge all human emotions and intentions, and to not have attachment to them, or judge them as good or evil.

To refine what you asked just now, it [evil] is not really a human mutation but rather a manifestation of human actions coming from ego/human/third dimension mind and not unlimited Godmind. Does this make sense to you? It is an aspect, not a mutation.

"Remember, everything is possible..."