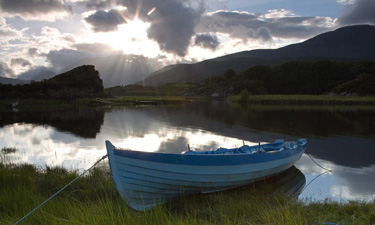 Kendra is a spiritual teacher who manifests in the physical, third dimension world through Leslie Austin. Kendra made her first appearance to Leslie in 1971. Since then she has helped hundreds of people with her insight, metaphysical and spiritual guidance, and profound and witty wisdom.

In the distant past Kendra lived in Ireland, the "Emerald Isle of Europe", among  incarnations in other times and places. She holds a great resonance with this mystical land of druids, leprechauns, giants, and ancient symbolism.

The Celtic Knot Symbol for Trinity (triquetra) that Kendra uses for her logo has many symbolic meanings. We know the Celts honored the "Great Mother", a lunar goddess who was 3-personifications in one.  Other three-fold themes which sometimes come up in Kendra's teachings include:

Kendra prefers not to disclose information about her other past lives or her “personal” history as she does not want to cultivate a following based on her personality. She asks that people who engage in dialogue with her decide for themselves whether her teachings and guidance are helpful to them or not and that people use their common sense and good judgment when choosing whether or not to heed Kendra’s teachings.